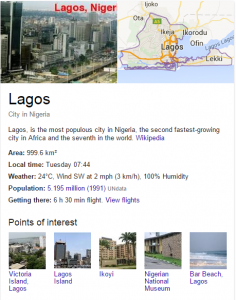 Status Update: The image has been changed

Concise Summary of the issue: It is quite amazing to see that a simple search of “Lagos, Nigeria” on google (the world’s leading search engine) presents a not so pleasing image of the metropolitan city of Nigeria, on its knowledge graph. The search engine suggests an image of Makoko, a slum neighborhood located in Lagos. Running a similar search on other cities such as Accra, Abidjan, Cape Town, London, presents beautiful skyline images of these lovely cities. The great news is that this inappropriate image summary of Lagos can be changed by the collective effort of Nigerians on the internet. 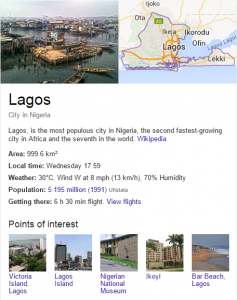 One mustn’t fail to clarify that the Google search engine is not totally to blame, as it is simply “a machine” that uses complex algorithms to display search results based on page ranks or popularity. However, I may have just spotted a flaw to this algorithm. Google picks off the Makoko image from a post on Lagos (Lagos: A city where you keep up or fall behind) made by a South African website called Daily Maverick. Perhaps the search engine prioritises images based on locations. But the question is, how many “Nigerian” websites, with beautiful pictures of Lagos, are actually hosted in Nigeria? Very few! Yes! including betaNigeria…Another issue contributing to this image saga may also be that most cool images of lagos, out there have copyright restrictions.

Now, Imagine trying to get a foreign investor, who is unaware of the city called Lagos, to invest in your high tech Lagos business. A simple search on Google could give you an uphill task of convincing the skeptical investor that Lagos is a big city with real estate costs comparable to those of cities such as New York and London.

How can this be fixed?

Google has a feedback mechanism which allows internet users to report errors! Yay! All we need now is for every Nigerian out there to flood the Google servers with reports on that image! Let us change this menace before it changes us!

A google search on Makoko suggests NO IMAGE!!!

The image below was taken by the writer of this post. Also watch the video by Catch TV on this topic.